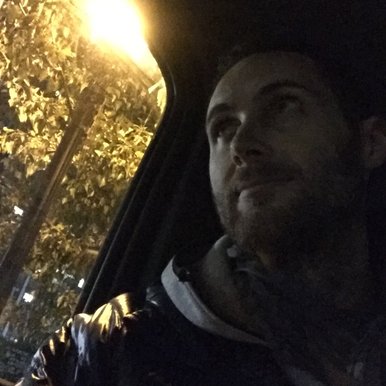 With New York 2150, I wanted to tell a story I connected with and build a realistic sci-fi world with my own aesthetic style. I’ve always been interested in new technology, space, science and psychology, and I wanted my series to explore all of these subjects. I have never done a project on this scale before: designing a new world, its bible, and communicating these aspects to my dedicated cast and crew. I worked with many artists from all over the world to help me bring this vision to life.

My personal and creative influences range from anime characters like Cowboy Bebop’s Spike Spiegel to sci-fi action heroes like Star Wars’ Han Solo and Guardians of the Galaxy’s Peter Quill to flawed TV antiheroes like Californication’s Hank Moody to Michael J. Fox in general. All of these characters keep their cool no matter what, a trait that defines New York 2150’s protagonist Jayden Jaxon.

In addition to his bounty hunter arc, Jayden also struggles with returning to a place where he doesn’t feel welcome and doesn’t want to revisit. Roaming the streets of New Manhattan triggers memories of his lost love and a pain that he has a hard time suppressing. Jayden’s personal struggles interfere with his professional goals. Who hasn’t experienced that?

I have lived in New York for a few years now. Every time I go back to Paris, my hometown, little things would trigger flashbacks and flood my heart with nostalgia. Letting go of the past and the pain of lost love are universal themes I wanted to include in my first film.

Making this pilot with this team was a great experience, but our journey has just begun. New York 2150 is an introduction to a story that will hopefully span three eight-episode seasons. I’m grateful to the amazing cast who believed in my vision and whose performances exceeded my expectations. We all clicked from the very first rehearsal and still stay in touch.

Actively in search of a streaming platform or a production company that would be interested in acquiring the rights.